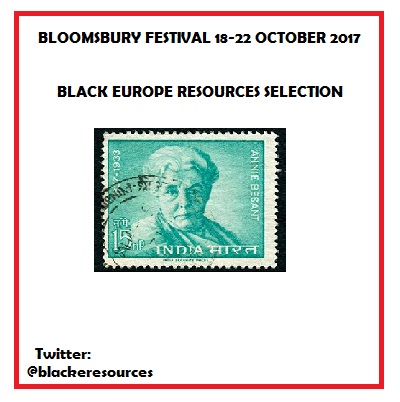 “Established in 2006, Bloomsbury Festival is a creative explosion of arts, culture and science. For five days each October, the streets, parks, museums, galleries, laboratories and public and private buildings of this vibrant cultural quarter play host up to 130 events which attract a significant audience from across London and beyond.”

“Enjoy Cornershop’s album of multiple collaborations as a physical experience, hear the sounds, discover the stories behind each song and delve into the band’s colourful history.”

“This exhibition documents the life and style of the sapeuses, the Democratic Republic of the Congo’s ‘lady dandies’ subculture, through exhibits of textile accessories and the reportage photography of Kinshasa-based photographer Junior D. Kannah. The sapeuses are a recent offshoot of the sapeurs, a male sartorial resistance movement that blossomed in Brazzaville, Kinshasa’s neighbouring city (now capital of the Republic of Congo) in the 1920s, when the former city was part of the colonial bloc of French Equatorial Africa.”

Black Consciousness feminist cultural producer Simmi Dullay, PhD researchers Oana Pârvan (Goldsmiths) and Gitanjali Pyndiah (Goldsmiths) with Nydia Swaby (SOAS) bring their art praxis and  research to discuss the commonality and differences in knowledge production of the global South, decolonization and the presence of the colonial knowledge systems inherited as residues of 500 yrs of European colonization.

“Using Gandhi’s teachings as inspiration, what is the meaning of nonviolence as a form of political action and how does it work? Dr Shahrar Ali characterises and assesses what is as much of a legitimate question of our times as it was in his day. He will also explore the question of whether violence can coexist with nonviolence as part of an all-embracing account of political action.”

“Astonishingly in 1917 the newly elected President of the Indian National Congress was a white elderly English woman.  The fiercely free-thinking Annie Besant and Gandhi admired each other hugely, but they disagreed about how to achieve Independence for India. In this short play Annie is anxiously awaiting the arrival of her fellow trailblazer… Presented by the team that produced TERRIFIC TONGUES last year, in association with RADA, Westminster Kingsway. Followed by Q&A with Dr Shahrar Ali from London School of Philosophy – see also his talk on Gandhi. Performances at 12 noon and 3.30pm”

“Barristers Kathryn Cronin and Louise Hooper of Garden Court Chambers discuss slavery in Britain today. Who are the victims, where do they come from, how are they recognised and what are we doing about it?”

“A snapshot of four very different areas of the world – each with a significant anniversary this year.  Four specialists discuss a burning issue.  Framed, introduced and Chaired by Dr Subir Sinha (SOAS) with thoughts of South Asia – Gandhi’s truth and the new post-truth era. Q&A follows.”

Find out more about the Bloomsbury Festival here