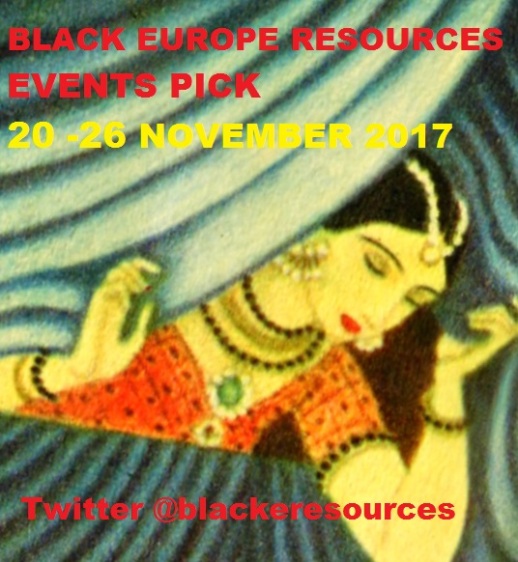 “Join Renée Mussai, Senior Curator and Head of Archive & Research at Autograph ABP, in conversation with artist, photographer and broadcaster Simon Frederick, exploring his interest in revealing the person within the photograph, his views on photography and television, new projects and his donation of prints to the National Portrait Gallery, which feature portraits of influential black Britons including fashion icon Naomi Campbell, actor Thandie Newton, rappers Dizzee Rascal and Tinie Tempah, British Vogue editor Edward Enninful, writer Malorie Blackman and journalist Sir Trevor McDonald, amongst others.”

PARTITION, 70 YEARS ON: WHAT HAVE WE LEARNT FROM THE DIVISION OF INDIA? (LSE, LONDON)

“The 70th year of Indian independence inevitably recalls Partition and the violent division that followed it. In a lecture that considers the lessons for other countries facing similar divisions, Kishwar Desai talks about establishing the Partition Museum in Amritsar, and considers whether partition and division are ever reparable. Lady Kishwar Desai (@kishwardesai) is an author and columnist and chair of the Arts and Cultural Heritage Trust, which is responsible for creating the Partition Museum, dedicated to the memory of the Partition of the Indian sub-continent in 1947. Susheila Nasta MBE is currently Professor of Modern and Contemporary Literature at Queen Mary College, University of London and Emeritus Professor at the Open University. The Migration Museum Project (@MigrationUK) is working to establish the UK’s first national migration museum, telling the long story of migration into and out of this country and providing a forum in which to discuss the impact of migration on our national identity.” Twitter Hashtag for this event: #LSEMMP

ADVENTURES OF BENGALI PIONEERS FROM VOYAGERS TO ENTREPRENEURS BY BRITBANGLA (MUSEUM OF DOCKLANDS, LONDON)

“A glimpse of a world of the Bengali seamen and adventurers in the Age of Empire, from the late eighteenth century to 1960’s. With visual photos, brief history via story telling and networking over refreshments and snacks. A unique evening based on real life true oral stories with a creative presentation and Bengali music. As British power and trade spread across the globe, so the port of London grew and prospered and the docks became the centre of world trade. Bengali people, especially the Sylhetis were the pioneers in crossing the sea in the Age of Empire. In their voyages, they worked as crewmen on merchant ships, and then began to settle abroad, mainly in Britain and the USA. Some of those who settled in Britain started restaurants and lodging houses to become successful entrepreneurs. Special Guest Speaker: Dr Aaron Zaffar, expert on Lascars & Seafarers. With fascinating insights on the Pirate Queen & Ibn Buttata, the Moroccan traveller who visited Bengal in 1346 who may have influenced people to journey across the seas.

Zac Miah, barrister at ASW6 Chambers, London, who recently researched through the Greenwich Maritime Museum’s shipping archives for a record of his dad arriving to UK in 1937 and who later became a successful entrepreneur.

Shahida Rahman, the author of Lascars, will share her personal inspirational story of her father who arrived in 1957 and mother in 1963 to settle in Cambridge.

Taryn Khanam from BritBangla will talk about the Bengalis travelling to Europe during the British colonial period and the ‘Bengali bhadralok’ including the Bengali ladies in the 19th Century. Also will share her aunty’s journey to UK in 1960.

Optional: Arrive at 5:15-5:45pm ~ Free Short tour of Museum of Docklands with Shahida Rahman
Event In Wilberforce Room. Doors will open at 6.00pm-7:00pm: Networking, light refreshments and snacks. Meet the speakers and curator. Chat to Shahida Rahman about her book ‘Lascars’. Event start: 7.00-8:45pm for story telling, presentation and Q&A.”

“Lina will discuss her father’s partition displacement from East Bengal (now Bangladesh) which prompted a radical survival strategy to find safety in 1950s Britain. She will highlight how his own ‘shell shock’ affected his life, sense of self, identity and belonging. Lina will discuss the impact of inheriting the fallout from partition’s trauma, the hard challenges she’s faced whilst living in this betwixt position of 2 polarised cultures and experiences that have offered the greatest learning…As part of the lecture, footage will be shown of a filmed interview she produced with Tony Benn in 2008 as a gift for her father.”

TALK: SHRABANI BASU ON HER BOOK ‘VICTORIA AND ABDUL: THE TRUE STORY OF THE QUEEN’S CLOSEST CONFIDANT (SOAS, LONDON)

“Originally published in 2010, Victoria & Abdul by Shrabani Basu told for the first time, the true story of how a young Indian Muslim servant came to play a central role at the heart of the empire, and reveals a tender relationship between an ordinary Indian and his elderly queen.”

“A day of free talks as part of the Gujarati Yatra – Journey of a people exhibition.

The exhibition charts the historical journey of the Gujarati community as well as celebrating its rich cultural heritage. All talks are free, but booking is essential as places are limited.”

“The mainstay of our festival will feature films that explore the theme of Modern Slavery. On Saturday 25th November at 13:00, we’ll be screening Broomfield’s second feature film Ghosts, a drama about the Morecambe Bay cockle pickers tragedy, when 23 illegal Chinese workers were swept to their death. Based on the interviews and articles of our special guest journalist for a post-screen Q&A Hsaio-Hung Pai. BOOK TICKETS.

Join us afterward at 17:00 for a drinks reception and a talk on labour film festivals and the cinema of globalisation with Alejandra Marano (Buenas Aires), Talat Bhat (Sweden) and Paula Gerraty (Dublin).BOOK TICKETS.”

“A Benefit screening followed by discussion and live music focussing on the experiences of children from 1970s to the present day who have escaped war, conflict and poverty in search of a better home. Proceeds will go Hackney Migrants Centre, Child Migrant Stories and Calais Children initiative.”

“This year marks the 60th and 70th anniversaries of Indian, Malaysian, and Ghanaian independence. Histories of Asia and Africa are not often told together. But in the 1950s and 1960s, Asians and Africans promoted a new, optimistic vision of the ‘Third World’ as tensions escalated during the Cold War. This free public event highlights the vibrant networks of Asian and African activists, intellectuals, and artists who met and travelled across the two continents in the era of decolonisation. The event will launch a history exhibition and digital visualisation – designed by Tarim at the Watershed’s Pervasive Media Studio – that maps their journeys. This will be followed by a roundtable discussion with members of Bristol’s Black and Asian activist and creative communities on the ways in which a historical understanding of African and Asian solidarity and connection might serve them today. Speakers include Sado Jide, Edson Burton, Jendayi, Sabita Ravi, and Enggi Holt. There will be an exciting program of cultural activities, including a fusion Indian/African dance performance by Aanchal and Rubba, live music, and storytelling of African and Asian folktales by Louis MacKenzie (Artisan Theatre). We will also be offering West African snacks, and featuring Indonesian and Indian food stalls run by Bristol-based chefs!  This event is organised by the Afro-Asian Networks Project, a research network funded by the Arts and Humanities Research Council, in partnership with the University of Bristol’s Department of History and Brigstow Institute, as well as the Black Southwest Network. For more details about the Afro-Asian Networks Project, please visit: http://afroasiannetworks.com”

“Our exhibition at SSSM is Scotland’s first dedicated exhibition which will promote the contributions of the South Asian community to Scotland. Come and explore how the ‘Punjabi peddlers’ evolved into ‘exceptional entrepreneurs’ and ‘pioneering political figures’. Learn about how they arrived and settled in Scotland. Discover the many social, economical and political ‘firsts’ achieved by this small yet very organised community that had a visionary outlook and learn about the early pioneers and the qualities they possessed that helped make this possible. Find out why Scotland produced not only the first Muslim Councillor but also the first Muslim MP in the UK.”