This work is the culmination of Migrant Voice’s “Changing Lenses, London stories of integration” project which brought communities together to explore integration and create shared messages to build stronger communities. 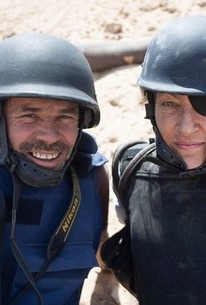 UNDER THE WIRE (BERTHA DOCHOUSE, LONDON)

“Dir: Chris Martin. United Kingdom / 2018 / 93mins. On 13 February 2012, two journalists entered war-ravaged Syria. One of them was acclaimed Sunday Times war correspondent, Marie Colvin, known for her fearless journalism. The other was her colleague, photographer Paul Conroy. Their aim was to cover the plight of Syrian civilians trapped in Homs, a city under siege and relentless military attack from the Syrian army. Only one of them returned. Told through footage from the scene, clips from live television and recent accounts, this is the story of Paul and Marie’s fateful mission, and the horrors of the Syrian war that they bore witness to.”

“On a stormy night in 1954, a woman doomed to marry one of five men discovers the wildcard choice might just be the person she’d been hoping for all along. “An Adventure” follows headstrong Jyoti and her fumbling suitor Rasik as they ride the crest of the fall of Empire from the shores of post-Partition India to the forests of Mau Mau Kenya onto the industrial upheaval of 1970s London and the present day. But what happens when youthful ambitions crash hard against reality? When you look back at the story of your time together, can you bear to ask yourself: Was it all worth it?

Witty, charming and full of fearless historical insight, “An Adventure” is an epic, technicolour love story from one of the country’s most promising young writers about the people who journeyed to British shores in hope and shaped the country we live in today. This world premiere will be directed by Bush Artistic Director, Madani Younis (The Royale, Leave Taking).” 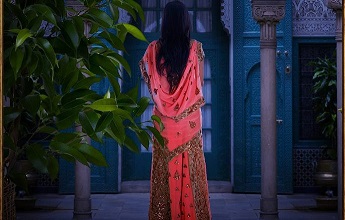 “From Sinbad to Ali Baba, join us on a voyage of discovery through the greatest stories ever told as the historic Hoxton Hall is transformed into an opulent palace this autumn!

A young servant girl, Dunzayad is to marry the powerful king Shahryar. But this isn’t her husband-to-be’s first wedding – every single night he marries a new girl, and every single morning he has her killed. As she steps up to take her marriage vows, her sister Sharazad can’t stand aside and watch; defiantly facing danger, she bravely sacrifices herself in place of her sibling. With the feast drawing to a close and the end in sight, Sharazad starts to tell stories. And with every fantastical tale she stretches out the thread of their lives a little further, slowly but surely melting her new husband’s stony heart. Filled to the brim with music, puppetry and dance, Arabian Nights is the world premiere of a new play by Nessah Muthy, writer of “The Host” and “Heroine”. Based on the ancient library of texts,”One Thousand and One Nights”, it is a celebration of the artistic and cultural history of the ancient Middle Eastern world, with thousands of legends bounding across its pages. Blending tales from ancient Arabic, Jewish, Greek, Indian, Persian and Turkish cultures together alongside a broad range of musical and puppeteering disciplines, this new production stretches across both borders and genre in an evening of storytelling that weaves a tapestry into the future. Age Restriction: 8+.”

“Summer 1978, Simon and his friends should be looking forward to leaving school, but the National Front are on the streets, Simon’s Bibi is ashamed of him and his Dad spends his life hiding in the pub. When Simon’s cousin Baljit comes to stay, she introduces him to the Bollywood classic, Sholay. Inspired by the film’s dynamic duo, Jai and Veeru, Simon and Baljit find their inner superheroes and set out to change their world forever. From the producers of Miss Meena & the Masala Queens, The Deranged Marriage and Britain’s Got Bhangra, Rifco Theatre Company and Watford Palace Theatre with Oldham Coliseum Theatre present a new play about friendship and courage.”

Review & Other venues outside London here

“This year’s Safar Film Festival examines the enduring and symbiotic relationship between literature and film in the Arab world, presenting a rich programme of cinema from the 1960s to the present day. This literary journey through Arab Cinema reveals an exciting, unwieldy canon constantly defying expectation. The historical relationship between Arabic literature and cinema not only reflects the cultural narratives of the day but also the wider political and historical junctions of the latter half of the 20th century. In the wake of colonial rule, adaptations were rife and extremely popular with audiences, and this transfer of indigenous stories from page to screen helped individual nations find their own cinematic, and wider cultural, identities. Safar excavates this formative period, highlighting one of the least explored chapters of Arab film history, with classic adaptations from Syria, Egypt, Tunisia and Algeria, including some world premiere restorations. The festival explores the myriad ways in which literature and storytelling can influence contemporary cinema – through story structure, folklore, autobiography – with documentaries, shorts, and features from Iraq, Palestine, Jordan, Qatar, and Lebanon, all accompanied by Q&As. The festival takes place across the Institute of Contemporary Arts and the Institut Français.”

Find out more here or here

“A trio of films by left, feminist and black workshops, including “Handsworth Songs”, the celebrated film essay on race and disorder in Britain. Some of the most successful workshops emerged from black and ethnic minority filmmakers, among them the trailblazing “Black Audio Film Collective”. Their “Handsworth Songs” premiered on Channel 4 in 1986, a year after the riots in Birmingham and London. Incorporating newsreel and archival material, the film’s multi-stranded narrative invites us to consider how mainstream news reduces complex events to problematic stereotypes. Also screening,”Red Skirts on Clydeside” was produced by the all-women Sheffield Film Co-op, about the rent strikes led by women in Glasgow in 1915; and “Launch”, by Newcastle-based Amber Film Workshop, who document the construction of the World Union oil tanker by focussing on heavy machinery, steam and noise: the scale of the endeavour, the solidarity of the workplace, and the community who depend on it.”

“Stephen Bourne is a writer, film and social historian specialising in black British heritage and gay culture. As noted by the BBC among others, Stephen “has discovered many stories that have remained untold for years. Stephen Bourne will give an engaging and informative talk about his new book “War to Windrush – Black Women in Britain 1939 to 1948.” Commemorating the 70th anniversary of the arrival of the Empire Windrush, “War to Windrush” explores the lives of Britain’s immigrant community through the experiences of Black British women during the period spanning from the beginning of World War II to the arrival of the Empire Windrush in 1948. Stephen Bourne’s reading will take place from 12pm – 12.45pm and after which he will be happy to answer audience questions.”

“After the nationalization of Egyptian cinema in the 1950s and the subsequent collapse of the industry in the late ‘60s, a large number of filmmakers were invited to make films in Lebanon and Syria, including Youssef Chahine and Henry Barakat. The jewel of this shortly-lived exiled cinema was Tewfik Saleh’sThe Dupes (Al-Makhdu’un), the uncompromising adaptation of Ghassan Kanafani’s acclaimed 1963 novella,”Men in the Sun”. A sobering chronicle of three Palestinian refugees in Iraq attempting to escape their destitute camp life to get to Kuwait, Saleh’s adaptation – one of the greatest in Arab film history – is by turns austere, ferocious and defiant, setting a template for numberless Palestinian chronicles to emerge. Initially banned in Syria and Egypt upon release,”The Dupes” has lost none of its power to provoke, stimulate and confront. This special, free screening is presented in partnership with KCL Action Palestine and will be followed by a discussion on the film, the book, and Palestinian resistance literature, led by SAFAR curator and film expert Joseph Fahim and Anna Bernard, Head of Comparative Literature at Kings College London. Tickets are free but we strongly recommend reserving your place in advance.” To find out more about the wider SAFAR: A Literary Journey Through Arab Cinema programme, head to our website now:https://www.arabbritishcentre.org.uk/projects/safar-film-festival-series/safar-2018/

“Join our panel discussion to examine how we remember war through commemorative sculpture. Exploring the debate over commemoration in the years after the First World War and today, the panel will consider how memorials reflect the social and political values of their time and assess their contemporary relevance in the centenary of the end of the war. Join Emma Login, First World War Programme Manager at Historic England, artist Said Adrus and Sam Edwards, Senior Lecturer and Programme Leader in the Department of History, Politics & Philosophy at Manchester Metropolitan University as they explore the politics of commemoration. This panel will be chaired by Sarah Victoria Turner.”

“The First World War was waged between empires that were global in their ambitions and reach. Between 1914 and 1918, millions of African soldiers served in long, colonial campaigns that spanned the whole of the African continent, contributing to victories throughout the First World War. In addition to this fighting, African soldiers from British, French and Dutch African territories were brought to Europe’s western front, where they lost their lives alongside unknown, unheralded and undocumented carriers. “Mimesis: African Soldiers” eeks to commemorate these Africans who fought, served and died during the First World War. This new multi-screen installation by artist John Akomfrah remembers the millions of African men and women who participated in the First World War, either as soldiers or carriers…”

“A day celebrating the culture of the French Caribbean. Immerse yourself in the rich history, heritage, literature and visual arts of the French Caribbean and its diaspora in this study day. Our keynote speaker, H Adlai Murdoch (Tufts University), introduces the multifaceted cultures and histories of the islands of Guadeloupe and Martinique. Panels of leading specialists will explore the fascinating history and heritage of the French Caribbean as well as its rich literature. Our panellists will also discuss migration and its impact on postwar immigrants and their descendants. Join us for a day of talks, reflection and discussion. The draft programme for the day can be found here. Your ticket includes morning and afternoon tea and coffee and a sandwich lunch. In partnership with the AHRC ’Translating Cultures’ Theme, the Eccles Centre for American Studies at the British Library and the Institut Français”

“Fire In Babylon is the breath-taking story of how West Indies cricketers triumphed over its colonial masters through the achievements of one of the most gifted teams in sporting history. Their undisputed skill, combined with a fearless spirit, allowed them to dominate the genteel game at the highest level, replaying it on their own terms. This is their story, told in their own words. Rotten Tomatoes 91%/ This month’s welcome kitchen supper club will be adding some West Indies flavour to our usual line up of world food. Leave space for the taste explosion. Doors at 6, food from 6.30, film at 7.30. Panel discussion with Surrey County Cricket Club from 9pm. Tickets free to refugees and asylum seekers. Please email to secure your place on welcomepresents@gmail.com

“By Memorial 2007 Hosted by The Institute of Commonwealth Studies. Colonialism and Slavery in Popular Culture Today. Afua Hirsch is an author, journalist, broadcaster and former barrister. Having studied and worked across 15 countries in West and Central Africa on international law and development, Afua became the West Africa Correspondent for The Guardian, establishing the paper’s first ever regional bureau in Ghana. She is also the former social affairs editor at Sky News, and the author of the Sunday Times bestselling book “Brit(ish): On Race, Identity and Belonging” (2018), winner of the Royal Society for Literature Jerwood Award. Afua appears on regular current affairs debate shows on Sky News, CNN, the BBC, writes a column in the Guardian, and broadcasts, writes and speaks widely on identity, diaspora, socio-economic developments and social justice.”