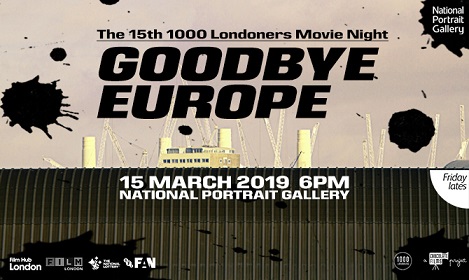 “In the days that the UK leaves the EU, we invite the people of London to join ‘Goodbye Europe’ – a unique film screening created specifically for this historic moment in the capital. ‘Goodbye Europe’ is an anthology of new short films about the London lives of people from each of the 28 nations in the EU. It will show parts of the city that you may never have seen – profiling the rich and poor, the young and old, the integrated and the outsiders, from the West End all the way to the ends of the Tube lines. This will be a documentary experience like no other – a journey through the lives of European London, shot in the final months of the UK’s time in the EU. Included in these 28 micro-documentaries are the stories of:

– A German man and woman who came to the UK on the Kindertransport in the World War II era and met and married in later life.

– A Czech man who by chance discovered he was fluent in Russian at the age of 12.

– A Dutch stay-at-home Dad who offered his spare room to a Syrian refugee.

‘Goodbye Europe’ will take you inside a cage fight, an evangelical church and a rehearsal room at the Royal Ballet. They will show you the perspectives of a Bulgarian abseiler, a Swedish economist, a Spanish Big Issue vendor, a Finnish hairdresser and many many more. The films will be edited along BFI footage from the 50s to today, curated by the archivists from London’s Screen Archives. Following each screening, we offer a panel discussion with filmmakers and contributors. ‘Goodbye Europe’ is the 15th and most ambitious 1000 Londoners Movie Night to date. Join us at the:

Click the links to book tickets, or get in touch at info@1000londoners.com or 0207 793 42 87 asking for Lex or Sarah. See our Movie Nights page and Facebook for more info about each screening. Looking forward to seeing you and celebrating European Londoners!”

“This first UK exhibition to explore the refugee crisis through illustration features 40 multi-media works by 12 contemporary artists, two of whom are themselves refugees. Illustrators have the unique opportunity to act as visual journalists, spending extended periods of time in situations where photography is banned or too intrusive.”

“It’s so exciting now being in a country with freedom of expression.”

“Reunited: the Syrian refugee and artist who drew him in Calais.” Read the story of Olivier Kugler and Ammar Raad in The Observer

“Background: Adjoa Andoh and Lynette Linton direct the first ever company of women of colour in a Shakespeare play on a major UK stage, in a post-Empire reflection on what it means to be British in the light of the Windrush anniversary and as we leave the European Union. As we play our part in defining a nation’s history and we become the shoulders on which future generations will stand, Shakespeare asks us to consider the destiny that we might be shaping for our ‘scepter’d isle’. Richard II marks the beginning of a cycle of history plays that will provide a unique opportunity to rediscover how Shakespeare perceived ‘this blessed plot, this earth, this realm, this England’. Our year-long exploration of ‘our scepter’d isle’ will take us on a journey through history via Henry IV Part 1, Henry IV Part 2,Henry V, Henry VI, and Richard III.

Beset by problems at home and abroad, a capricious king is forced to relinquish his ‘hollow crown’. As his supporters abandon him and his power trickles away, Richard reflects with startling eloquence on the disintegration of his status and identity.”

“Photography exhibition showcasing the work of two of the most exciting photographers working in fashion today, celebrating the vitality and importance of fresh perspectives within fashion photography in our globalised and interconnected world.”

“Kader Attia’s first UK survey exhibition traces several strands of the artist’s work from the past two decades. Defining himself as an activist as well as an artist, Attia has over the past twenty years set out to create artworks that engage our capacity for thinking as well as feeling, and provoke what he calls a ‘real, fundamental dialogue’ about the world in which we live. In sculptures, installations, collages, videos and photographs that move ‘back and forth between politics and poetry’, Attia inventively explores the ways in which colonialism continues to shape how Western societies represent and engage with non-Western cultures, and offers a passionate critique of modern Western systems of control that define everything from traditional museology to the design of modernist social housing. A key group of works in The Museum of Emotion engage with the idea of repair as both a physical and symbolic act. These include objects ‘repaired’ by the artist using techniques and materials employed in certain non-Western cultures, as well as videos and large-scale installations that explore the way in which repair relates to psychological as well as physical injury, and to collective as well as individual trauma. In The Museum of Emotion, Attia transforms detailed research into compelling works of art, and at the same time probes the ways in which the museum itself might be transformed into a forum for emotional response, capable of eliciting, exploring and even harnessing strongly held feelings of anger, sorrow, joy and grief. This exhibition is supported by Qatar Museums Doha, Outset Contemporary Art Fund, The London Community Foundation and Cockayne – Grants for the Arts, Institut Français du Royaume-Uni and the Yanghyun Foundation.”

Read about this exhibition in the New York Times here 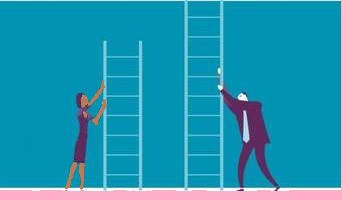 SMASHING THE GLASS CEILING: RACE, GENDER AND CLASS IN THE WORKPLACE (THE GUARDIAN, LONDON)

“Join us at Guardian HQ for our latest Smashing the glass ceiling event on Tuesday 19 March 2019. This series focuses on how to promote equality in the workplace, and in our third edition we’ll be exploring the intersections of race, class and gender and how they impact on our careers. This event will be chaired by Maya Wolfe-Robinson, the assistant editor for Opinion at The Guardian. Maya joined the Guardian in 2010 to cover legal affairs and has a particular interest in race and gender issues.

7.05pm-8.15pm Smashing the glass ceiling: Race, gender and class in the workplace

A year on from the explosive gender pay gap reporting, which exposed shocking pay differences between men and women at a host of well known companies and organisations, the government is planning to crack down on the race pay gap. What are the race, gender and class based barriers to entry and progression in the workforce, and what can you and your company do to meaningfully combat them? How does it feel to be in the minority at work? What are the blockers to progression, how can you call them out and overcome them? How can companies remove these barriers? Should companies publish their class pay gaps? What are the effects on inflexible working on social mobility? What will the response to the race pay gap reporting be and how should you deal with the aftermath? What can we all do to sincerely embrace diversity and inclusion at work? How can we stop diversity commitments becoming a tick box exercise? Avoiding tokenism; what are the pitfalls of positive discrimination? How can both the race and gender pay gap reporting shed light on wider unconscious bias?”

“Lecture in Sociology – The concept of Islamophobia as anti-Muslim racism is establishing itself in social science and public discourse alike. Yet there is a tendency to focus on Muslims as an ‘Other’, an ascribed identity, at the expense of Muslim inter-subjectivity agency. The latter is particularly important for multicultural recognition and accommodation. The bringing out of the political significance of the latter is illustrative of a sociology which thinks of socio-political problems and solutions as existing within a common intellectual framework. Going further, such normative sociology makes explicit and justifies its normative presuppositions and prizes public intellectual engagement.

Speaker: Professor Tariq Modood FBA, Professor of Sociology, Politics, and Public Policy, University of Bristol. Tariq Modood is Professor of Sociology, Politics and Public Policy and founding Director of the Centre for the Study of Ethnicity and Citizenship at the University of Bristol. He was awarded a MBE for services to social sciences and ethnic relations in 2001, made a Fellow of the Academy of Social Sciences in 2004 and elected a Fellow of the British Academy in 2017. His latest book is Essays on Secularism and Multiculturalism (Rowman & Littlefield, 2019).”

“The ‘Fourth Bhagat Singh Annual Seminar: Remembering the 1919 Jallianwala Bagh Massacre’ will be held on the same day Bhagat Singh, an Indian socialist revolutionary was hanged by the British in Lahore, now in Pakistan. The seminar commemorates the global character of Singh’s anti-colonial and anti-imperialist aspirations. It also remembers the Jallianwalla Bagh Massacre which took place a century ago in the city of Amritsar, now in India. This annual seminar aims to bring centre-stage marginalised histories and resistance legacies in Pakistan and India. It is being conducted in the memory of struggle(s) for freedom. In the current volatile geopolitical scenario in South Asia, charged with religious chauvinism and populist jingoism, it is all the more important for the people of the region to explore the ideas and legacies of Bhagat Singh. This year’s event consists of academic panel discussions, a one person play, and literary and musical performances. The seminar is free to attend but registration via Eventbrite is essential.”

“The Diversity festival in Birmingham on March 22 & 23 will be dedicated to reflecting on public history and heritage with a focus on diverse stories, exploring the different types of collaborative work that has been done around WW1 subjects since 2014, and to thinking about future/potential collaborations and how community organisations and academics can continue working together to explore all aspects of the past. The festival will enable participants and attendees to better understand the challenges and opportunities of collaborative work around history, heritage and commemoration. A series of panel discussions, informal workshops, film screenings, and performances will provide an informal and friendly forum for stimulating conversations around co-produced knowledge and critical responses to history and heritage. We welcome community organisers, heritage and creative workers, academics, local historians, and members of the public. Registration from 11am. Event starts at 11.30am. Please note that there is a separate registration page for Friday evening’s performance: https://www.eventbrite.co.uk/e/legacies-of-the-first-world-war-festival-diversity-evening-performance-tickets-53343414589