“A ground-breaking project created by curator Tara Munroe to address untold stories of African heritage and culture. Drawing on objects from three regional museums, experts on Africa have worked with selected members of the local African Caribbean community to explore the stories of these artefacts and the communities who created them.” 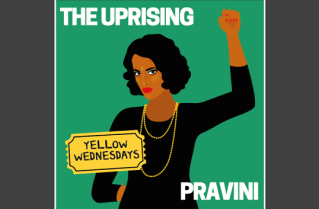 “The Uprising is a music documentary that tells the story of resistance against racism in Europe. With commentary and experiences from academics and activists, Pravini offers a decolonial perspective on the anti-racism movement in the Netherlands, UK and France. She not only provides an analysis of the history and legacy of colonialism, but also a vision on strategy for the future of the movement. This documentary zooms in on collective challenges of communities of color. In 9 self-written songs Pravini connects the fight against Blackface, the struggle for the recognition of colonial crimes that the Netherlands has committed in Indonesia, the fight for the liberation of Palestine and the struggle in the political field for an inclusive society. “The Uprising” offers a unique view of the resistance against racism in Europe through the eyes of people of color. The film’s producer and director Pravini Baboeram will be joined by Birmingham activist Sham Murad for a post screening panel discussion.”

“With the help of previously unpublished archive material, this documentary shows how racism became ingrained in popular culture between 1810 and 1940 through human zoos, circuses and colonial fairs exhibiting those taken by force from their native lands, flaunted as “primitive savages”.

“The Department of Politics and International Studies and the Centre for Cultural, Literary and Postcolonial Studies invite you to a discussion of Insurgent Empire: Anticolonial Resistance and British Dissent by Priyamvada Gopal (Reader in Anglophone and Related Literature, University of Cambridge), in conversation with:

“Returning for a second UK tour following its huge sell-out success last year, Black Men Walking sees destiny, history and identity converge against the gritstone backdrop of the Peak District. The story follows Thomas, Matthew and Richard, three black men from Sheffield who meet once a month to go walking. Out in the Peaks, they find themselves forced to walk backwards through two thousand years before they can move forwards. In its ‘expansive excavation of race and identity’, the production asks what it means to be black and British, and to what extent are we defined by our geographical roots?” (Manchester Evening News)

Read a Review by the Manchester Evening News here

“Celebrate the lunar festival, Diwali, with dance, music, art and a celebration of light at the National Maritime Museum. Watch a performance by the Bollywood Co, before trying a few moves out for yourself, create crafts to celebrate the triumph of light over darkness, and join in a parade at the end of the day.”

Explore Traders: the East India Company and Asia gallery with James Robson, a Chinese lascar (sailor) who served on the fastest and greatest of the tea clippers, Cutty Sark…

John Simmonds (1783–1858), was a black sailor who served with Nelson at the Battle of Trafalgar, 1805. Developed with John’s descendants and using over 40 years of family research, the performance will take you on a journey through the museum, from Nelson’s Ship in a Bottle by Yinka Shonibare MBE, to the Nelson, Navy, Nation gallery…”

One Under (Curve Theatre, Leicester)

“An evocative play about the power of guilt and the quest for atonement, award-winning playwright Winsome Pinnock (Rockets and Blue Lights, Leave Taking) and Graeae’s Associate Director Amit Sharma (The Solid Life of Sugar Water, Cosmic Scallies) join forces to explore the fragility of human relationships in this reimagining of One Under. When a young man jumps in front of a train Cyrus is driving, the mysterious circumstances prompt him to search for answers…”

If you wish to make a donation or become a sponsor, please see the Donors & Sponsors section of the website: https://blackeuroperesources.com/donors-sponsors/ . Your support will help Black Europe Resources survive and inform public discussion through newsletters, commentary and promotions of books, publications and events, thank you.