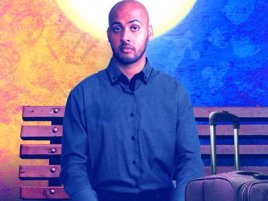 “Stifled by life in middle-class India, Krishnan is desperate to see more of the world, so he visits the exotic island of Great Britain to learn about life and who he is. What does Krishnan’s journey teach him about the world? What might he learn about himself? And what happens when he falls in love with one of the natives?”

Pariah Khan is a writer, performer, filmmaker and professional wrestling manager. He was named one of Bristol’s most influential young people for his work in theatre and comedy. He was selected by BBC Three and The Latimer Group as one of the UK’s top 50 creative young people and he was selected by Channel 4’s Random Acts to write and direct his first short film Slice.

“This event is part of the British Academy’s season on Sustainable Futures. Environmental racism is on the rise in the United States, with minority and impoverished communities much more likely to live near polluters and breathe polluted air. In this event, Lucy Bond and Jessica Rapson will draw on their recent research to highlight how the tourist and heritage industry in the American Gulf States (Florida, Alabama, Mississippi, Louisiana, and Texas) is helping to conceal environmental racism as well as being complicit in the air and water pollution crisis that is blighting predominantly African American neighbourhoods.”

“Slavery may have been abolished in 1833, but in the nineteenth and early twentieth centuries over 2 million Indian migrant labourers were indentured to work in plantations around the world. The workers boarded ships that would take them thousands of miles from home in search of ‘a better life’, while the abolitionists, and Indian nationalists, called this a ‘new system of slavery’ and the ‘international shame of the Indian’. The roots of our Mauritian, Asian-Caribbean, Malaysian & Asian-African communities are all buried in this history, known as THE GREAT EXPERIMENT.

As award-winning theatre-makers Border Crossings create their new play about these indentured migrations, the company of actors from Mauritius and the UK begin to feel the weight of history in their own lives and their responsibility to the past. Join them as together they question who has the right to tell a story and who has the right to be heard.

Explore this hidden history further with our programme of wraparound events and experiences: arrive early to look around the interactive exhibition which forms the show’s set; attend a post-show discussion with cast members, researchers and historians; come along to a Collection Day where audiences will be invited to share and discuss items from their family history.”

“An engaging, award-winning documentary about the influential and outspoken musician Fela Kuti.”

SLAVERY, ABOLITION AND THE UNIVERSITY OF GLASGOW (UCL, LONDON)

“Glasgow became the first British university to declare historical income derived from transatlantic slavery on such a scale. The report’s findings effectively balanced out the institution’s glorious abolitionist narratives. The University of Glasgow has long championed itself as a leader of the movement for the abolition of slavery in the British West Indies, exemplified by the eighteenth-century critiques and actions of its scholars, Francis Hutcheson, Adam Smith and John Millar. In response to the report, the institution launched a nine-point programme of reparative justice, also the first British university to launch a project on such a scale. This lecture provides insights into the role of the historian in the process: the archival work in the records of Old College – as the University was known in the 18th and 19th century – in order to understand more about two key stages: a) bequests donated by individuals involved with chattel slavery, and b) the capital campaign which allowed the University to move to the Gilmorehill campus in 1870. This lecture, and the report on which it was based, offers a model that assesses how contemporary institutions profited from transatlantic slavery.”

Dr. Stephen Mullen is a historian at the University of Glasgow. His research focuses on Scotland and Glasgow’s connections with the Caribbean in the 18th and 19th centuries. A monograph, The Glasgow Sugar Aristocracy in the British Atlantic World, 1776-1838 is forthcoming with the Royal Historical Society. 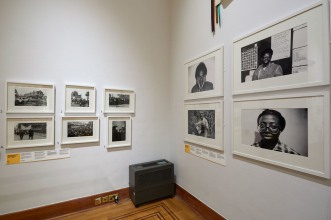 “This display will explore Birmingham’s vibrant and varied history of protest and activism, and the role the city has played in some of the most important campaigns and movements in British history.”

Revered by everyone from Martin Luther King Jr. to Beyoncé, W. E. B. Du Bois stands as one of the most important and influential African American activists and intellectuals of the 20th century. As co-founder of the NAACP (National Association for the Advancement of Colored People) and author of the seminal book The Souls of Black Folk, Du Bois is celebrated for his profound and prolific writings. But alongside his famous essays, Du Bois produced an astounding – yet little-known – body of infographics to challenge pseudo-scientific racism, making visual arguments every bit as powerful as his textual ones.”

Alongside reproductions of Du Bois’s graphics, the exhibition presents original artwork by Mona Chalabi, Data Editor at The Guardian, repurposing his distinctively clean lines, arresting shapes and bold primary colours for the 21st century. Chalabi’s work demonstrates the enduring relevance of Du Bois’s data visualisation methods and the racial inequalities he fought against.”

“Clever and complex vision of black Britons, then and now. Full of sharp, stinging dialogue… filled to the brim with great writing.” The Guardian

A subversive comedy drama about imperialism, cross-racial adoption, cultural appropriation… and tea. Brighton, 1862. A day in the life of Sarah, an African girl, adopted by Queen Victoria and raised in the Queen’s circles. Today is the eve of her having to return to Africa but will she go? The Present. A day in the life of Sarah, a black middle-class woman staying in a Cheshire village with her husband and small child. They are paid a visit by well-meaning neighbours who have something to confess… The two Sarahs meet Queen Victoria for tea. This won’t be your regular tea party…Written by Bruntwood Prize-winning playwright Janice Okoh and directed by Dawn Walton”

The listings included here are provided only for information, not necessarily endorsement. Please let Black Europe Resources know if any links are broken. If you have received this information by email, it is for the exclusive use of the intended recipient(s). If you wish to recommend this blogpost, please use the relevant web address that you will find at the bottom of each post. Further details can be found in the T&C and Privacy Policy.

Blackeuroperesources.com is a Blog on Black, Asian and Minority Ethnic issues edited by Thushari Perera / Contact me / Twitter @Blackeresources / Advertise with me / Become a Donor or Sponsor to support the continuation of the Blog / T&C & Privacy Policy