Remembrance Day or Poppy Day is fast approaching. In Britain and many Commonwealth countries, it is observed on 11 November to mark the end of the First World War in 1918. Hostilities formally ended “at the 11th hour of the 11th day of the 11th month”, it was “the War to end all wars”. “Never again” was the spirit of the day. The ceremony at the Cenotaph, the audio-visual landscape or the “colour of war” remains, according to critics, “white’” and overwhelmingly “Eurocentric”.

In Britain, Remembrance Day is also an occasion for the tabloid media to go into some kind of “poppy controversy”, whether it is a celebrity who has forgotten to wear a poppy to support the British armed forces or even the colour of the poppy itself. Tabloids usually promote the Royal British Legion’s “official” and “militarist” red poppy. Other media, especially social media users, followed by younger generations, seem to also be receptive to the pacifist message of the “white poppy” by the Peace Pledge Union.

I just wonder whether these debates are more a generational thing in the western world. Is it really true that younger generations take freedom for granted? Do millennials know more about the growing number of available resources on World War One and “race”, “Empire” and “colonial troops” than older generations? Do they have a wider understanding of the global impact and inequities of the so-called “Great War” and legacies of wars in general? Are current debates so clear-cut anyway?

New international research suggests that national public discussion should not forget the “misremembered” history of the First World War. According to the British Council, “public knowledge about the First World War in the UK and other countries rarely goes beyond the experience of European soldiers on the Western Front”, even though “respondents around the world also feel the effects of the war to this day.” 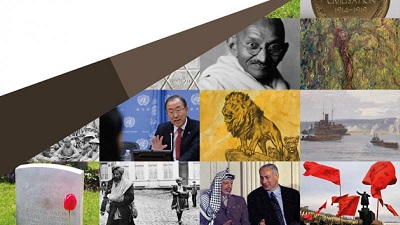 According to the Imperial War Museum, the outbreak of the First World War saw “a great response from the Empire.” Research by the National Army Museum indicates there was around 15,000 West Indians enlisted. Most men from the Caribbean served in the West India Regiment which is not to be confused with the British West Indies Regiment (raised in October 1915), serving in France, Italy, Africa and the Middle East. At least 180,000 Africans also served in East Africa. Around 25,000 black South Africans were also recruited.

More than 1 million Indians also fought as part of the British forces serving in France, East Africa, Mesopotamia and Egypt according to the British Library. It is estimated that around 800,000 Hindus, 400,000 Muslims, and 100,000 Sikhs had volunteered. There were also 140,000 Chinese workers on the Western Front according to the leading academic Xu Guoqi.

Race and Racism as a Military Strategy

According to experts in this field as Santanu Das and Richard Fogarty, race and racism were a military strategy: “From the colour of their skins, to the content of their religious beliefs, colonized peoples’ attributes were of major concern to those making decisions about how and where to wage war.” European societies were embedded with colour prejudices and doctrines of racial hierarchy. Colonial troops therefore tended to be deployed overwhelmingly as labourers or support workers, which were evidently also dangerous and deadly, as it included digging trenches and working in ammunition dumps.

Black British people were less likely to be deployed on the Western Front as soldiers, unlike Indians who could also become soldiers, depending on whether their ethnicity was considered “warlike” (e.g. North Indians). As David Olusoga says in his book “Black and British: A Forgotten History”, “there was the view in Britain and the ‘white dominions’ of the empire (Australia, Canada, New Zealand and especially South Africa) that is was to be a ‘white man’s war’.” Although there were Black British soldiers in other theatres of war than the Western Front, there were fears that it would “undermine white racial prestige, and threaten the security of white settlers in the colonies.”

The wounded were also subjected to scrutiny as it was believed that many were “malingering” (also known as the “self-inflicted theory”). They were sent to separate “prison-like” hospitals, the most famous being the Pavilion and Dome Hospital in Brighton. The letters they sent to their families were often partly censored.

Millennials have access to a wider range of educational resources in museums, libraries and archives relating to the First World War and the role of Black and Asian troops. The contribution of previous colonial troops is more widely researched and acknowledged, and the ‘narrative’ seems to be more inclusive especially since the Centenary. But typically, now that this important anniversary has passed, has awareness raising, events programming and curation truly changed as funding has run out? Can the narrative truly change anyway when sponsorship is likely to be restrictive? When we know what is happening in Syria, Yemen etc., the questions that the British Council’s report “Remember the World As Well As the War” asked in 2014 becomes more personal and relevant. Have we learnt the lessons of the First World War and its global reach? Does Britain remember, “all those involved, all the contributions, all the experiences, all the trauma, and the lasting legacy”? I guess, for many new generations, Armistice Day should emphasise more “a work of memory” rather than a “duty of memory.”

If you wish to make a donation or become a sponsor, please see the Donors & Sponsors section of the website: https://blackeuroperesources.com/donors-sponsors/ Your support will help Black Europe Resources survive and inform public discussion through newsletters, commentary and promotions of books, publications and events, thank you.

One thought on “Do millennials know more about the First World War and its global legacy than older generations?”