Welcome back to the Black & Asian News!

The article that I would recommend you to read this week is “Throttling the Global Pandemic: A Trifecta of Science, Politics, and Profit” by Professor James H. Mittelman published by 21st Century Global Dynamics.

The resource that I am reading is “Help For Parents and Carers Guide” by No More School Exclusions, an abolitionist coalition grassroots movement in education.

The film that I would like to watch for Valentine’s Day is The Great Indian Kitchen. According to the BBC, it is a very relatable universal story!

Image by Alberto Benini from Pixabay

“There’s a popular saying in Kerala, she says, which translates into “you wear progressive slippers, but leave them at the doorstep”. In India, like in many other parts of the world, the burden of unpaid care work normally falls on women. According to an International Labour Organization report, in 2018 women in India cities spent 312 minutes a day on unpaid care work. Men did 29 minutes. This is what The Great Indian Kitchen wants to change. “Women are living in jails created by men. “

“China has criticised the BBC for its reporting on coronavirus and the persecution of ethnic minority Uighurs. The BBC said it was “disappointed” by the decision. It follows British media regulator Ofcom revoking state broadcaster China Global Television Network’s (CGTN) licence to broadcast in the UK.”

“The BBC is facing a backlash after making the role of its most senior BAME news executive redundant, and appointing an all-white board in contravention of the corporation’s diversity rules. Kamal Ahmed, once tipped as a future director-general, has lost his job as part of plans to “modernise” BBC News.”

“The ‘Power Up’ Participant Programme will see 20 Black music creators and 20 Black executives and industry professionals selected each year to receive grant support of up to £15,000, ‘capacity building’ and mentoring, support from partners and marketing support. The application process for participants opens today (February 10), and closes on Wednesday March 10 at 6pm GMT. Successful applicants will be announced in April 2021.”

Beyond disco: the Pakistani Brummie siblings who made a lost 80s synth-pop classic, The Guardian, 10 February 2021

“The mixed media creative, whose neon installation inspired by childhood visits to the Blackpool illuminations currently adorns the outside of the Tate Britain, said she was inspired by her father for her latest work.”

The Contribution and Challenges of Ethnic Minority Businesses in the UK, Open Political Economy Network, 10 February 2021

“Businesses led by ethnic-minority entrepreneurs contribte at least £74 billion a year to the UK, according to a new OPEN report [Minority Businesses Matter] by Philippe Legrain and Martyn Fitzgerald published today.”

“The series will follow Eric, CEO of Impact X Capital Partners, a venture capital firm supporting underrepresented entrepreneurs across Europe, in his quest to offer not only his expertise but also capital investment to four small struggling British businesses, all hoping to turnaround their fortunes and secure their future.” 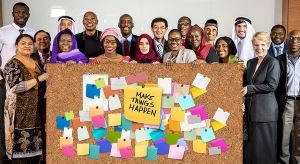 “Almost three in five (57%) BAME (Black, Asian and minority ethnic) working professionals believe the momentum of diversity has fizzled out in their workplace since the Black Lives Matter (BLM) movement kicked off last year, compared to three in 10 (30%) white working professionals, new data revealed. Research commissioned by People Like Us, a non-profit, also found that only 39% of UK professionals feel diversity and inclusion (D&I) is a higher priority in UK workplaces directly as a result of BLM.”

“Boohoo has cut ties with more than 60 Leicester suppliers over concerns into working conditions…Manchester-based Boohoo took a battering last summer after the Sunday Times sent an undercover reporter into a Leicester factory making clothes destined for its websites, which he said was paying workers £3.50 an hour – well below the minimum wage. Leicester employs something like 10,000 people in fashion and textiles, in around 1,500 businesses, and the city is a key part of Boohoo’s supply chain.”

“While diversity is improving and the barristers’ profession is becoming more transparent about diversity data, it still falls short of representing the demographic of the society it serves, the Bar Standards Board’s (BSB) report on Diversity at the Bar 2020 shows.”

Image by Lourdes ÑiqueGrentz from Pixabay

“This leaflet has been produced by the parents of No More Exclusions, supported by Just Education Matters. Please see our website for further details.”

Less than one in five postgraduate research students are from ethnic minorities, Largs and Millport News, 9 February 2021 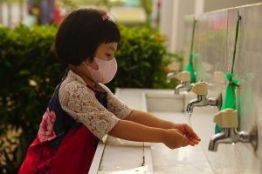 Image by Nghi Nguyen from Pixabay

“the world is largely pursuing a my-country-first, market-based approach to coping with the pandemic. A course correction is urgently needed. In lieu of vaccine nationalism, the multipronged strategy suggested above constitutes a morally right and politically wise strategy for throttling the global pandemic.”

“MPs have given the government until July to report on whether PPE shortages directly contributed to COVID-19 infections and deaths in NHS staff, after a report warned health professionals had ‘risked their own and families lives’ to provide care. A report by the House of Commons public accounts committee (PAC) highlighted concerns among frontline staff that guidance did not specify a high enough level of PPE to properly protect them against infection, while some supplies were substandard or insect-infected. Black, Asian and minority ethnic (BAME) staff were more likely to report experiencing PPE shortages or feeling pressured to work without adequate protection – over twice as many BAME doctors reported experiencing PPE shortages compared with white colleagues.”

‘Not getting help has led to me being disabled’: Inquiry into NHS maternity ‘systemic racism’ opens, ITV News, 9 February 2021

“Black women are four times more likely than their white counterparts to die in pregnancy or childbirth in the UK, while women of Asian heritage face twice the risk, data published in January by MBRRACE-UK, which examines deaths among pregnant women, new mothers and babies, found.”

“This study focuses on the impact of the COVID-19 lockdown on identity, relationships and psychological wellbeing among British South Asian gay men (BSAGM).”

Image by PublicDomainPictures from Pixabay

“A new study published in Nature Medicine is looking to address this…It took account of additional undiagnosed features that would be overlooked by doctors employing the commonly used radiographic grading systems. And because patients who reported severe pain and scored highly on the algorithm’s own measure, but low on the official grading systems were more likely to be black, it suggests traditional diagnostics may be ill serving the community.”

“Volunteers who watched their work go up in flames after a racially aggravatated arson attack on a multi-cultural centre will today receive more than £70,000 donated by thousands of well-wishers. The historic listed building which housed the Belfast Multi-Cultural Association’s (BMCA) food bank was gutted in the fire a month ago today.”

“Zara Mohammed, a masters graduate in human rights law and a training and development consultant, was elected to Britain’s largest umbrella body of mosques, Islamic schools and Muslim associations.”

What is offensive is these governments’ housing arrangements for asylum seekers, Open Democracy, 9 February 2021

“Brexit or not, Britain has a lot in common with the continent in terms of hostility to ‘outsiders’”

Image by Patrick Behn from Pixabay

“Heather Small has spoken to The Mirror about an ‘unpleasant’ experience she faced with a police officer in 2020. The songstress has recently become an ambassador for the Rio Foundation”

Why We’re All To Blame For China And India’s ‘Filthy’ Co2 Emissions, EuroNews Living, 6 February 2021

“It feels as though every time there’s a new study about the US or EU needing to reduce carbon emissions, there’s a voice which pops up and asks ‘but what about India and China?!’…There is undoubtedly truth in the fact that India and China are both major emitters, with China responsible for 28 per cent of carbon emissions and India 7 per cent, ranking them first and third in the world. But is the argument that simple? Not quite…”

“The Dutch Football Association (KNVB) have today launched an app that allows football fans to report incidents of racism anonymously. The app was inspired by Kick It Out‘s equivalent in the United Kingdom. The app, called Discrimination Alert, can be used to send reports of racism in or around the football field to the KNVB.”

“The legislative framework on minimum working conditions must be enforced for all workers as another important element of the fight against in-work poverty, MEPs underline. This includes atypical or non-standard workers in the digital economy who often work in precarious conditions. These workers must also be covered by existing labour laws and social security provisions as well as being able to engage in collective bargaining, they add.”

“Although the government has trumpeted the success of the EU Settled Status Scheme (EUSS), the programme for EU citizens to register their entitlement to stay in the UK, there are some groups that are currently falling through the net. This blog focuses on one such group: looked-after children and care leavers. A Home Office survey indicates that only 30 per cent of this group have been able to secure status under the scheme- with only five months left in which to apply.”

No way forward, no way back: the nightmare of migrants trapped in Bosnia, EuroNews, 5 February 2021

“Bosnia is a transit country for migrants trying to get to the European Union, but the European Union’s external border is closed. This has left thousands of migrants stranded. Hundreds of them, like Salman and his brothers, are sleeping rough in abandoned buildings, makeshift tents and even in old freight wagons. Temperatures in winter are way below zero in Bosnia and Herzegovina. So why are these people not placed in emergency shelters?”

More than two attacks per day on Muslims in Germany in 2020, TRTWorld.com, 9 February 2021

“Between 1915 and 1917, an estimated 1.5 million Armenian citizens were driven from their homes and murdered by the Ottoman Empire, alongside other Christian minorities. In 2018, Dutch lawmakers in the lower house of parliament voted overwhelmingly to acknowledge this act as genocide. But the decision did not become the country’s official policy and terminology.”